Life Before Deming Chopper: George’s Prepared Foods is one of the largest chicken producers in America, with eight production facilities in four states. At their processing facility in Harrisonburg, VA, they handle approximately 130,000 chickens per day. This facility has been operating under the George’s Inc brand for eight years and employs approximately 600 people.  The chicken processed in this facility is eventually delivered to your local grocery store in the form of deli products, raw chicken, or frozen items.

The DSI station typically handles wash down water, which is used to clean the processing equipment. This water is fairly clean during the day but the final rinse off at the end of the day will include feathers, chicken skin, gloves, safety glasses and wood particles. The pumps in this station operate continuously 6 days a week. This demanding application required George's Foods to purchase repair parts at least once per year

The existing pumps had multiple issues including seal and bearing failures. Often, the pumps needed new impellers as well, due to the presence of corrosive cleaning chemicals. The biggest issue was that the parts for the existing pumps were expensive and had very long lead times. The station operator, Bud Bolton, stated, “We can’t wait three months for an impeller.” 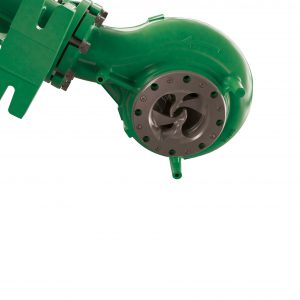 The latest failure led to Capital Equipment, the local Deming distributor, to begin looking at new solutions for George's Foods. In May 2019, they installed two Deming 3”, 7.5HP Demersible Chopper pumps with rail systems into the DSI pump station. These pumps saved George's Foods approximately $8000 compared to competitor pricing. The Deming pump was not only more affordable than replacing the existing pumps; it also had a shorter lead time. The Deming pumps shipped 3 weeks after the order was placed. Shortly after installation, there was a small issue with a large object becoming lodged in the impeller, which caused a seal failure. To mitigate the issue, Crane Pumps & Systems sent all of the required repair parts to a local pump repair shop, free of charge. Since that repair, the pumps have been performing without issue.

• The existing submersible chopper pumps were very expensive to maintain due to proprietary parts
• Repair parts had very long lead times, which caused for costly and lengthy downtimes on the DSI pump station

We use cookies on our website to give you the most relevant experience by remembering your preferences and repeat visits. By clicking “Accept”, you consent to the use of ALL the cookies. Learn More